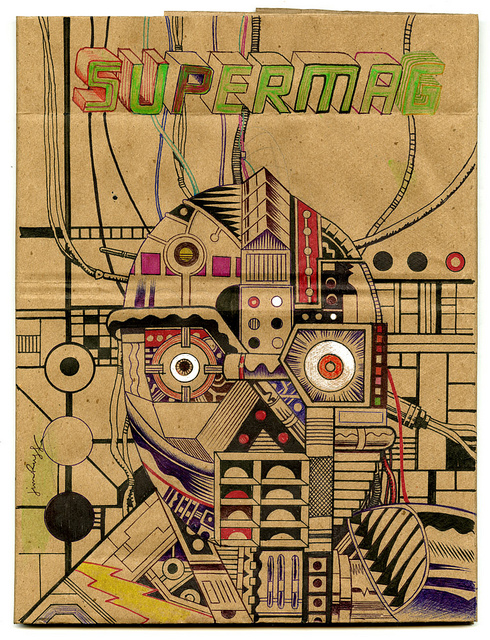 SUPERMAG etc:  An Interview with Jim Rugg
by Julie Sokolow

Jim Rugg is an Eisner-nominated comics artist, illustrator, and designer living in Pittsburgh, PA. When he’s not working on graphic novels and serialized comics such as Afrodisiac, Street Angel, and USApe, he’s illustrating for folks like McSweeney’s, VH1, and New York Magazine. He also co-hosts the Boing Boing podcast Tell Me Something I Don’t Know, featuring conversations with artists about their art and making ends meet.

We’re honored that Jim’s Healthy Artists poster found its way into Supermag, his latest print masterpiece fresh out of Adhouse Books. We got a chance to sit down and talk to Jim about Supermag, which is being heralded as a fearless one-man anthology.  Interview ingredients include: High art, low art, Vanilla Ice, pen nibs, and politics.

HEALTHY ARTISTS: Your new book possesses a certain magic; it resists easy classification. In the introduction, you write about “narrative collapse”. What does this concept mean in relation to Supermag?
JIM RUGG: I try to pay attention to my own habits – how I consume media, what I’m visually responding to, what movies I watch and what that tells me about my own aesthetic tastes. About five years ago, I realized that my patterns of reading had significantly changed; I wasn’t reading in a linear way. Rather than reading a book from page one to the end, I read excerpts of twenty books at once, finishing maybe one out of fifty. I was conscious of this shift, but didn’t know what it meant. I thought maybe my shorter attention span was reflective of channel surfing and web browsing.

Then I heard an interview with Douglas Rushkoff, the author of Present Shock. He uses the phrase “narrative collapse” to say that linear narratives take time. Stories take time. People nowadays don’t want to take the time to consume linear narratives. Rushkoff basically gave me a term for this thing I had been exploring for the past five years. 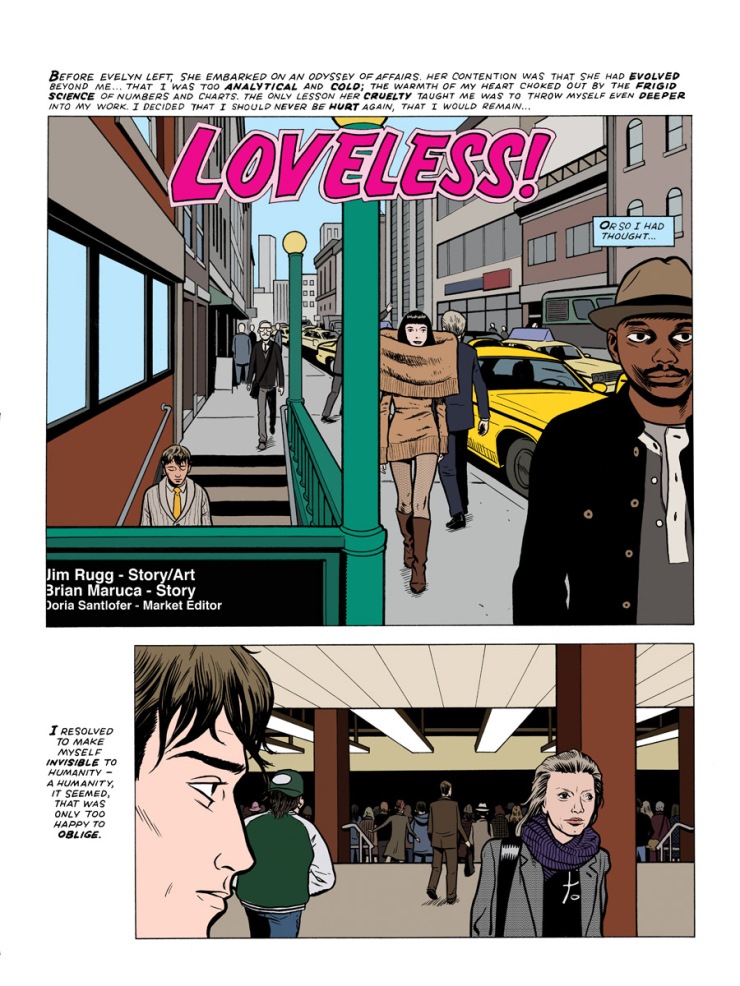 So Supermag represents a kind of fragmentation. Do you imagine readers will interact with Supermag as though they are scrolling through Tumblr?
It’s not designed to necessarily read in one sitting. You can pick it up here and there, when you’re looking to kill five minutes in an interesting way. It’s a collection of stand-alone pieces. My personal favorite is page 13. This guy is going into his apartment and is confronted by a doppelgänger of himself. Headlights shine from a car driving by and illuminate his face. And that’s it. That’s the whole piece.

I had an immediate, visceral response to the Vanilla Ice piece. I feel like it speaks to Jacob Covey’s quote on Supermag, where he calls you “an archaeologist whose work builds upon detritus to help us visualize our common past–”
I think people like to make fun of pop culture and someone like Vanilla Ice is often the butt of a joke. Blaxploitation films – whenever I started getting into those and was working on Afrodisiac – I saw that they were often the butt of the joke, an easy target for parody or satire. But the downside is then when you look at the original object, it’s obscured. You only know it through the lens of the ridicule and backlash it incurred.

So I started actually looking into Vanilla Ice when Ed Piskor asked me to do a pin-up for his Hip Hop comic. And then I started to realize that Vanilla Ice was a legitimate pop culture success. To just mock him would demonstrate a certain level of ignorance.  And to me, irony is discouraging. Why would you spend one second with something you don’t like? I can’t read all the books I’m interested in, I can’t see all the films I want to see. We now have access to all of history, there’s simply not enough time to process it. Why would you spend time on something that ‘is so bad it’s good’? It either has a value or it doesn’t. 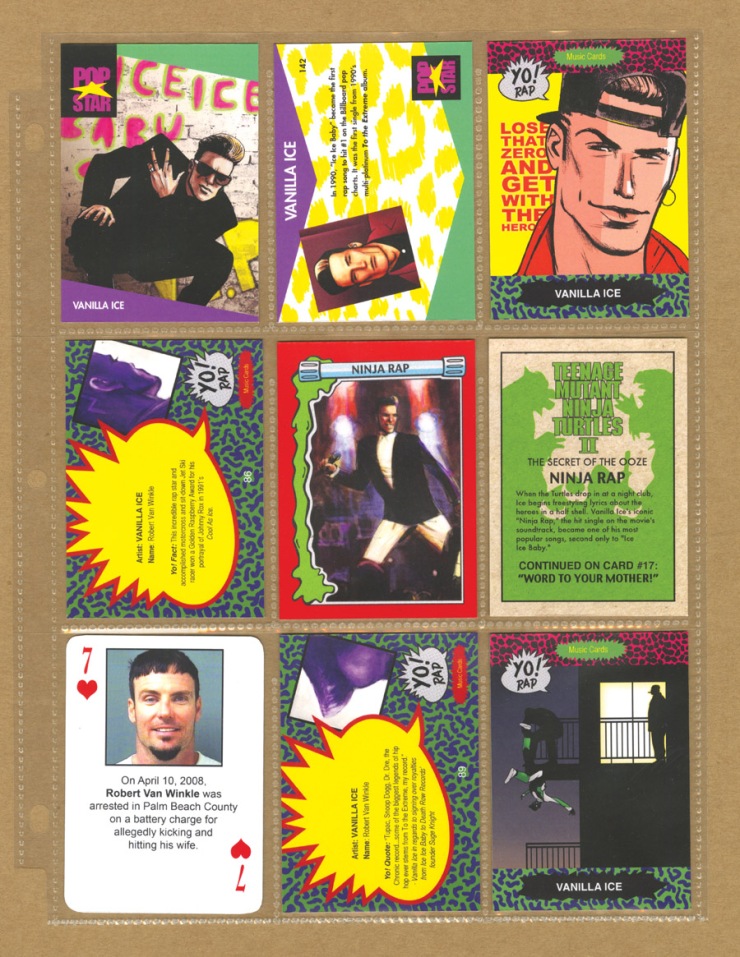 Some of the pieces in Supermag have been shown in a ‘high art’ gallery setting. But some reviewers call this a comic book, which evokes a different connotation. Do you have a comment on the high vs. low art distinction?
I think the real distinction is between art and advertising. When you look at a comic book or commercial art, you’re essentially looking at advertising: advertising for a movie, for the work itself as a cheap, mass-produced product, or an ancillary licensing object, like Spiderman underwear or something. Quite frankly, most of the stuff that influences me is advertising. And I’m fine with that. It’s what I like. Aesthetically, there’s no limitation to either side and we live in a sensational time. 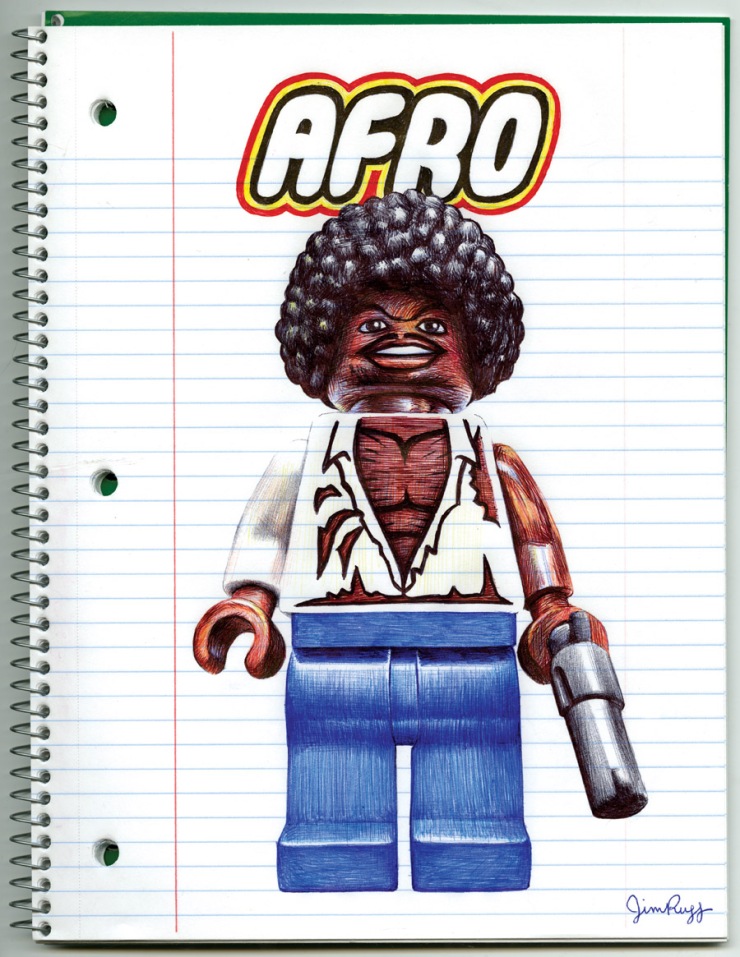 It’s also a time when print publishing is on the decline. Is Supermag supposed to be some kind of ultra-resilient new breed of magazine that can resist the traditional magazine’s fate?
Here, we definitely see some irony: As print declines commercially speaking, we now have access to printing technology that’s never been more affordable or higher quality. When I started doing comics ten years ago, the idea of printing an indie comic in color was ridiculous. That couldn’t happen unless you were Chris Ware. Now, you can print in color, you just don’t sell that many copies. The print medium is becoming more and more of an expressionistic outlet, rather than a commercial one. 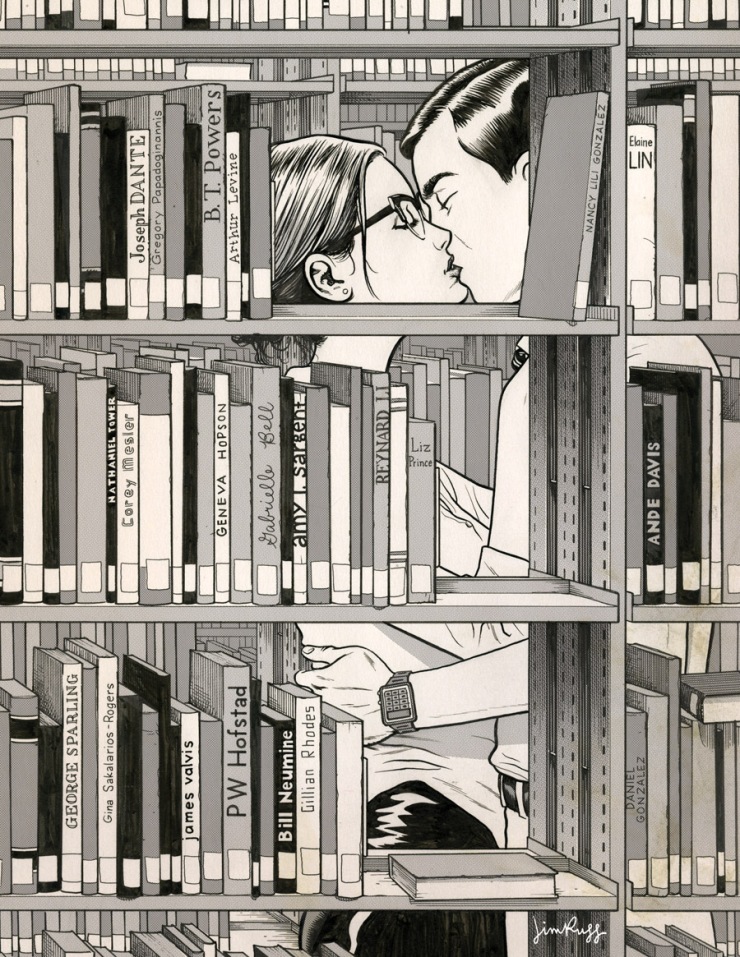 It’s a struggle for so many artists to find decent paying commercial gigs, let alone expressionistic ones. Your podcast Tell Me Something I Don’t Know focuses on well-known, established artists, their lives and work, and how they make ends meet. What have you gleaned from these conversations?
Every end of the spectrum – from thirty-year veterans to kids fresh out of art school – unless you’re born with a trust fund, you have to strategize to finance your art. I think the podcast tries to bring transparency to the business side of the art-making process. Supermag was funded in part by a Creative Development Grant from the Pittsburgh Foundation. Arts funding can create little pockets of financial and artistic freedom. I think everybody carves their art career out differently.

About a year ago, you sent me a great TIME profile on comics artist, Julia Wertz. On top of the general challenge to make ends meet as an artist, she was struggling with an autoimmune disease while uninsured. Would you say her story is emblematic of the comics scene?
It’s always been a part of comics. Frequently at shows, you’ll see artists selling their work at a reduced rate, in a mad dash to raise money for medical bills. The fact that people in America are charged so much more for health care than what the care actually costs is criminal. I don’t know how hospitals can charge $75 for an Aspirin. We need to address that first, because across party lines, you will find that people commonly disagree with financially corrupt practices. I think that’s what we need to focus on when we talk about health care reform.

A still from Healthy Artists (the movie!)

Learn more about Jim Rugg. And get your copy of Supermag online or wherever books are sold.