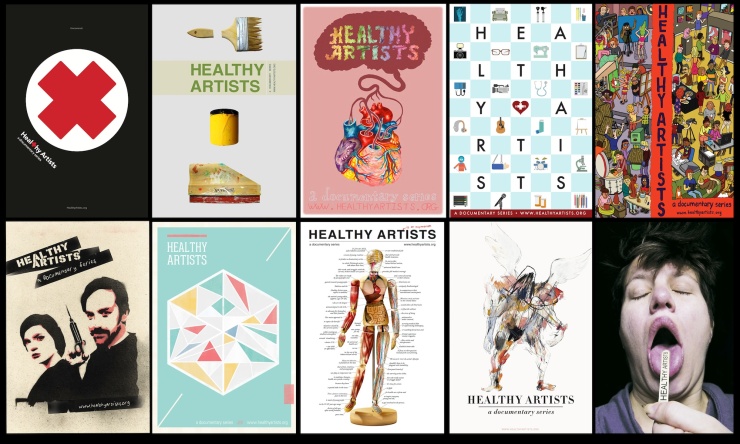 Between Oct. 1 and April 30, according to federal statistics, about 318,000 Pennsylvanians acquired private health insurance under the Affordable Care Act (ACA). Among them was Gabe Felice, one of the artists profiled by Julie Sokolow in her online video series Healthy Artists.

By spotlighting low-income artists, the series addressed the wider struggle for health-care reform in the U.S., the only developed nation without universal health coverage. At the time his segment was taped, Felice was thousands of dollars in debt after a bar fight landed him in the emergency room. (He says two guys jumped him.) The painter, then 32, hadn’t had health insurance since 1999.

But after Sokolow told him about the ACA, Felice signed up. Today, he says, “I have an insurance plan that’s a reasonable rate, which is nice.” While he still owes about $2,000 for the ER visit (“That’s probably gonna haunt me for a while”), he did avail himself of the free annual checkup the ACA provides for.

The ACA, a.k.a. Obamacare, is the biggest change in the health-care landscape since Sokolow launched Healthy Artists, in 2012. Sokolow, a musician and filmmaker, documented about 40 local painters, musicians and poets facing medical debt. She wanted to show how debt and health worries keep self-employed and underemployed people from realizing their creative potential and fully contributing to society.

The project, backed by the nonprofit Health Care 4 All PA, also aided the Pennsylvania Health Access Network, an advocacy group that promotes the ACA. “We’ve shared their [Healthy Artists] stories to keep generating awareness,” says PHAN‘s Erin Ninehouser. Healthy Artists inspired filmmaker Michael Moore to invite Sokolow to blog on his web site. And this past February, The New York Times ran an article about the Healthy Artists poster exhibition at ModernFormations Gallery.

While that exhibit and article capped phase one of Healthy Artists, Sokolow continues pursuing the bigger goal of single-payer health care. Meanwhile, despite its infamously botched rollout last fall, the ACA’s online health-insurance marketplace has been a balm for local artists, including Felice.

Take Daniel McCloskey, the comics artist who runs the Lawrenceville-based Cyberpunk Apocalypse writers’ project. After a face-plant bicycle accident last fall cost McCloskey three teeth, and left him with large unpaid hospital bills, Sokolow wrote about the uninsured artist on Moore’s website. The attention helped McCloskey, 27, exceed the Kickstarter goal for his latest comics project and pay down the bills.

Financially, McCloskey says, he caught a break when Allegheny General Hospital noted his low income and waived his non-dental bill: The price of one night in the hospital had exceeded his annual income of well under $20,000. McCloskey also patronized a reduced-cost AGH dental program staffed by oral-sugery trainees. (His titanium screws are in, the new teeth to come.) Had McCloskey been stuck with full-freight bills, he says, he could have lost his house, where he’s hosted residencies for some 40 writers and comics artists, and countless readings and other literary events.

Unfortunately, McCloskey didn’t acquire health insurance until after his accident. Having it now “makes me feel more secure,” he says. With ACA subsidies, he pays just $26 on a monthly premium of $160. “I don’t know that I would have been able to have insurance at all without subsidies,” he says.

In Pennsylvania, 30 percent of those who’ve signed up for private health insurance under the ACA were between 18 and 34 — the age of many artists struggling to launch their careers. But some Healthy Artists profile subjects are coping in other ways. Laurie Trok‘s main health issue is an autoimmune disease that had always ruled out affordable insurance. But while the ACA prohibits discrimination on the basis of pre-existing conditions, Trok, whose skills including jewelry-making and papercut art, hasn’t signed up. Instead, she says, she visits the East End Community Health Center, which charges on a sliding scale.

Trok, 31, wants health insurance; trouble is, she doesn’t know exactly what her income is. That’s a common problem for all sorts of freelancers, whose income typically derives from multiple sources and can vary wildly year to year.

Such coverage gaps — as with folks who earn too much to qualify for Medicaid but too little to afford private insurance — are why for Sokolow, the ACA is merely “a step in the right direction.” She backs universal, single-payer coverage, a la Canada.

That seems a long way off in the U.S. But Sokolow notes that Vermont has its own single-payer plan, set to take effect in 2017. In February, she blogged for Salon about Jon Stewart’s advocacy for single-payer, and she believes a lot of millennials favor single-payer, too.

Sokolow has also expanded her focus beyond artists. In May, her video about a UPMC employee who fasted to protest the low wages paid by the health-care giant was featured on the Huffington Post. And she’s allied with activist groups like Make It Our UPMC and Fight Back Pittsburgh.

“Health care,” she says, “is a human right. No one should be left behind.”